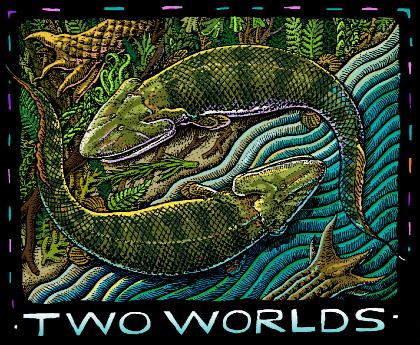 Yet another ‘missing link’ is revealed in the great chain of being that “ led ” to you and I!

A few months ago I received an email from my friend Dr. Ted Daeschler at the Academy of Natural Sciences in Philadelphia telling me about a new lobe finned fish fossil that he and his colleague Dr. Neil Shubin had unearthed in late Devonian rocks way up in Nunavut, Canada. One of the many extraordinary things about this new fish is that it looks almost exactly like an amphibian, except that it has fins instead of legs. How cool is that? These are no ordinary fins though. Look closer at them and you’ll see the rudimentary beginnings of limbs. These lobe fins have joints and finger like structures. This is evolutionary change at its very finest.

Needless to say I was beside myself with inspiration. I dropped everything I was doing and began madly drawing this critter and bombarding Ted with emails. I wanted to figure out what this animal looked like and how it behaved. I wondered about its place in the world and the history of life, acting as a sort of “terranaut” venturing out onto land, breathing air and sliding between two worlds. I wrote a song called the ‘Devonian Blues’. I drew pictures of Charles Darwin ( AKA Chuckie ‘D’ ) embracing it. I enlisted my designer friend Karen Lybrand to help me colorize some of the ink drawings I did.

Undoubtedly this fish was close to our ancestral line. It’s a link between the sea and the land and quite possibly could be the ancestor of every land roaming vertebrate to follow. When you look at it, you’re looking at our tribe. “Mom’, if you will. Heavy stuff if you think about it.

Ted and Neil named the fish Tiktaalik, a local Inuit name for the modern fish we call a burbot. 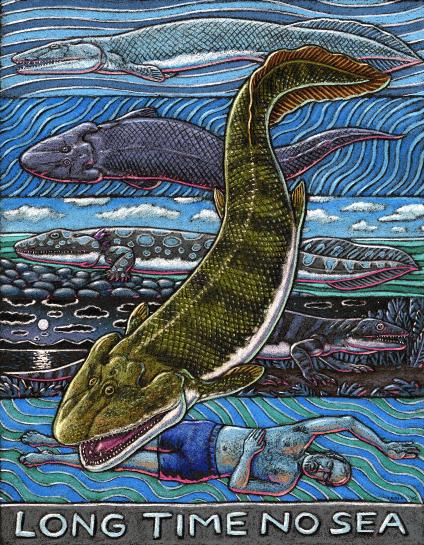 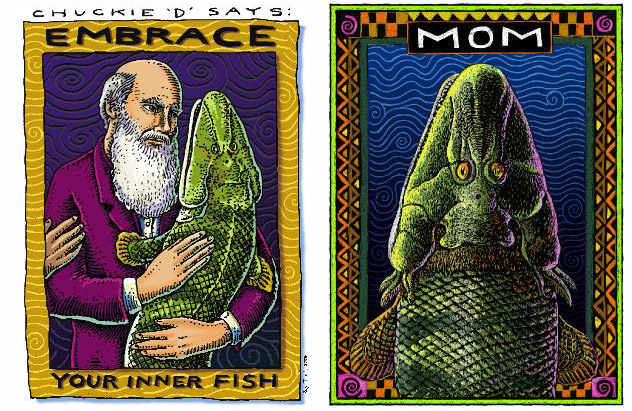