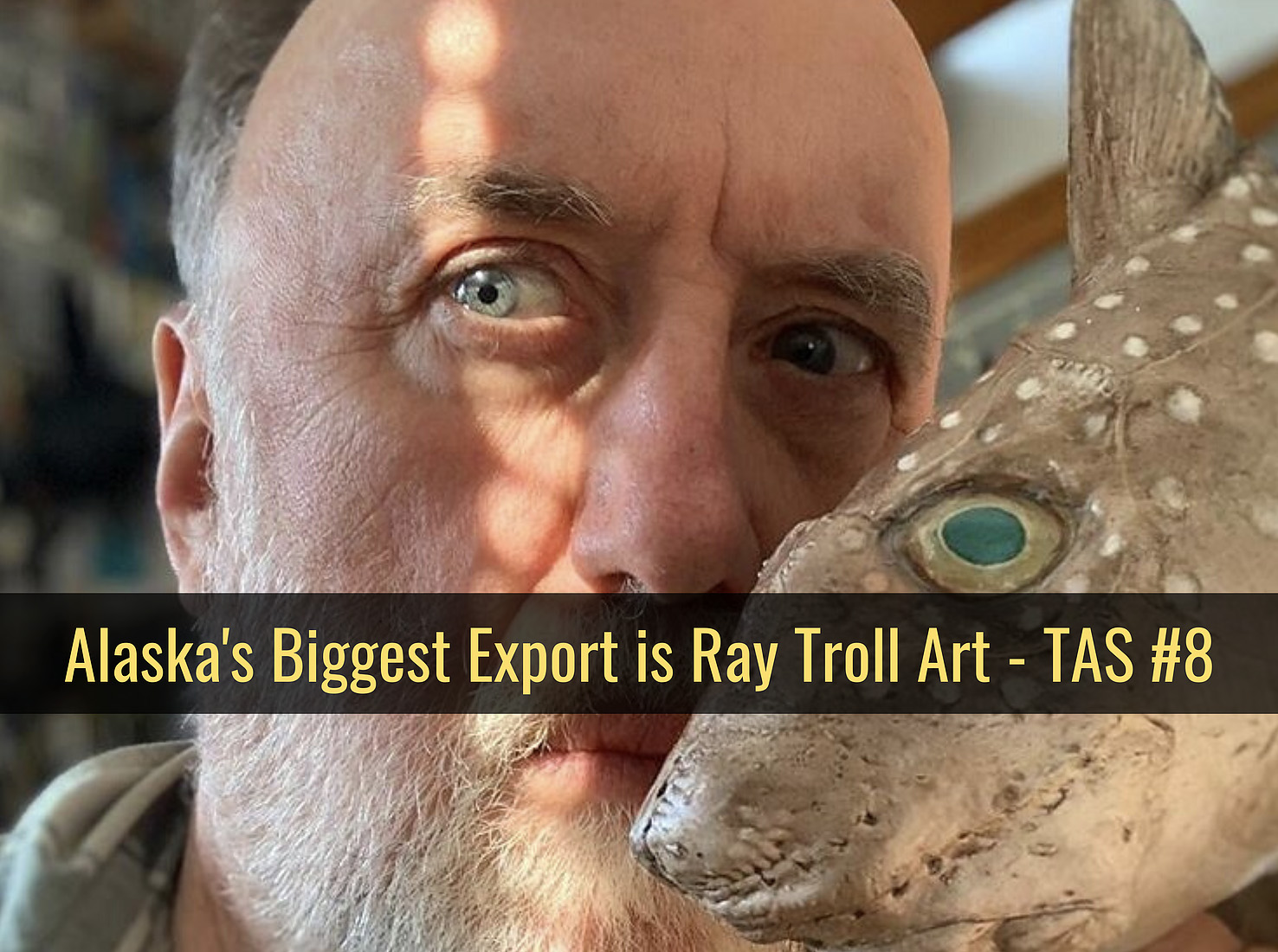 Alex Trokey, host of the Alaska Show podcast, sits down with Ray Troll, Ketchikan-based artist, to discuss how Alaska’s fishing industry inspired him to build a t-shirt empire that would ship millions of shirts worldwide and adorn the chests of rockstars and actors, the business of art, the founding of Salmonfest, the ongoing fight against Pebble Mine, and Alaska’s precarious future.

Ray Troll Interview is at 5:15 – skip ahead to it if you’d like! Listen here:

You are probably familiar with Ray Troll’s shirts. His most well-known designs like “Return of the Sockeye” and “Spawn Till You Die” have graced the chests of movie stars and rockstars, not to mention thousands of Alaskans.

As I talked to Ray on The Alaska Show Podcast I was curious about his rocket-fueled journey from a fishmonger in Ketchikan, Alaska to the artist behind countercultural touchstones that have lasted from the 80s through present-day. He has spoken to the hearts and minds of those who love the ocean and have sold millions of items in the process.

Ray was in something of a transition period in the summer of 1983. He just got out of graduate school and was teaching at his alma mater in Kansas. His dream was to be a college professor, but as a fresh MFA graduate it wasn’t easy to find a college that would take him seriously enough to consider giving him a full-time job and tenure.

So when his big sister Kate asked him to come up to Ketchikan and help her and her husband manage a little seafood shop on the docks called Hallelujah Halibut, Ray took the opportunity to have an adventure and make some cash for the summer.Like many dreamers before him, Alaska proved to be Ray’s personal Hotel California – and he found it hard to leave. Instead of returning to Kansas in the fall Ray stayed in Ketchikan and worked the slime line at a local cannery and taught part-time at the University of Alaska Southeast campus.

After selling fish and processing them day-after-day, it was only natural that the trained printmaker and artist would try his hand at drawing them. Heck, he could run downstairs from his studio above the cannery and grab a subject any time he wanted. He was passionate about fish culture, pop culture, and science and started to develop his surreal, yet scientifically accurate artistic style.

1984 was a turning point for Ray. He took one design he particularly liked – called “Let’s Spawn” – and printed up a few hundred shirts for a seafood festival in town that summer. Over the course of the three day event he practically sold out. Then he took the leftover shirts in odd sizes and wholesaled them to a local store for $1 profit per shirt.

Pretty soon the store had run through those shirts and were calling him for more. Ray realized he had stumbled on a real business opportunity and instead of gutting fish he could draw them for a living. He and his wife made a little hand-drawn catalog of designs, hopped on the Alaska Marine Highway, and started meeting with buyers in stores all over Southeast Alaska, many of which still sell his shirts almost 4 decades later.

The next chapter of Ray’s business started with a printer in Seattle in the early 90s. That printer took Ray’s designs, scaled up production, and hired reps to go all over the country and put his shirts in stores.

They started with Anchorage and Seattle, then expanded all over the Pacific Northwest. Soon after they had placed shirts in stores in the midwest and the east coast and Canada and by the mid-90s sales were going, in Ray’s word, “gangbusters.”

In spite of the early momentum, Ray says the business “collapsed in on itself,” because the new owner who bought the printer took on more artists, hired in-house designers, and put Ray’s line on the backburner. Without a small army of active salesmen traveling around the country the numbers plummeted and Ray went looking for a new printing partner.

Ray’s next found a printing partner in Post-Industrial Press in Tacoma, Washington.

He admits they had more modest wholesale ambitions, which fit Ray’s style. They diversified to include posters, stickers, calendars, and magnets and he worked with them to build out his online presence at TrollArt.com which is a website that Ray controls and is the only place people can buy his work online.

Ray never set out to build an empire. He just wanted to make cool designs and get off the slime line. The result is business that he estimates has sold “millions” of shirts since the mid-80s.

How did he do it?

Ray attributes his success to hard work, being true to himself, and a right relationship with his audience.

As far as hard work is concerned, he is a firm believer in putting in 40-60 hours each week on any enterprise you undertake. Ray is zealous about putting in his time at the studio everyday, and for that reason has developed a body of work over almost four decades that goes well beyond just fresh t-shirt designs every year. Ray has also helped create books, murals and large paintings, and museum exhibits. He’s done public speaking and teaching gigs, and even headlines a “sub-aquatic neo-folk” band called the Ratfish Wranglers.

Ray says new artists need to be bold. They cannot be afraid to put their work online and build a following or walk into stores and ask to speak to the buyer to get their work sold.

Finally, he says, his art is true to himself and his taste and his audience. He must be excited about something and truly think it is cool or interesting to put it on a shirt or a poster and put it in his store. And while he doesn’t pander to his audience, he values the feedback loop he gets. Sales don’t lie!

Ray Troll has built an unexpected Alaskan t-shirt empire since the 80s and his art has become iconic of the Southeast Alaska. True to the way Alaskans naturally diversify their skillsets, Ray’s used that platform to seed a number of other interesting ventures, including helping to found arguably Alaska’s best festival: Salmonfest, and we’re excited to see what he does next. 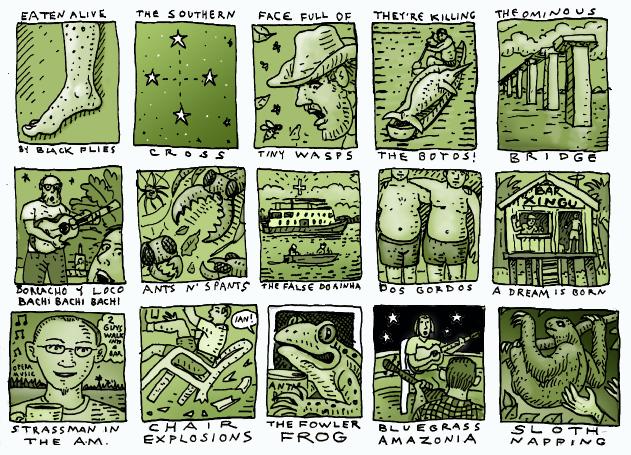 I spent a couple of weeks on the Amazon River this March with friends and family and had a blast as usual. It was my fourth trip to Brazil and each visit is always magical and always transformative.
To get you in the mood why not watch my animated Candiru song on youtube at http://www.youtube.com/watch?v=T7yxhvTJbM4

It’s a lovely homage to the Amazon’s most feared fish! Animation was done by Aubrey Mintz for the Miami Science Museum’s Amazon Voyage exhibit.There were 24 of us in all, along with a crew of seven aboard the magnificent riverboat Dorinha. We spent two weeks in March of 2009 exploring the Solimoes and Rio Negro Rivers, part of the vast network of rivers known as the Amazon. Our captain was Moacir Fortes and this was my fourth trip with the legendary “Mo”. It was also my fourth river journey with paleobotanist Kirk Johnson our trip organizer. As always Kirk had assembled a wide array of adventurers: scientists, artists, photographers, pilots, UPS-raconteurs, shop-keepers, marketing experts, musicians, and one ventriloquist. 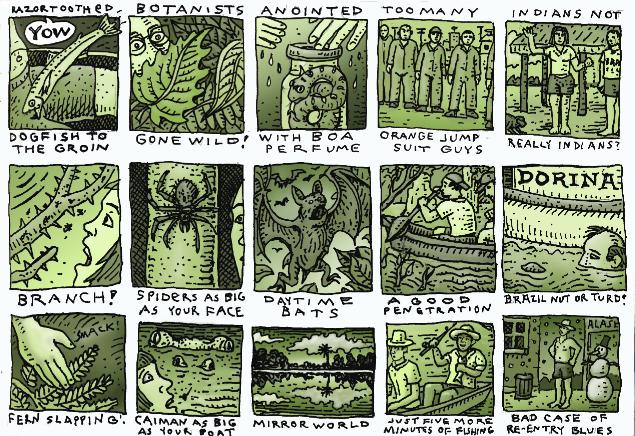 Here’s the slide show from the trip!