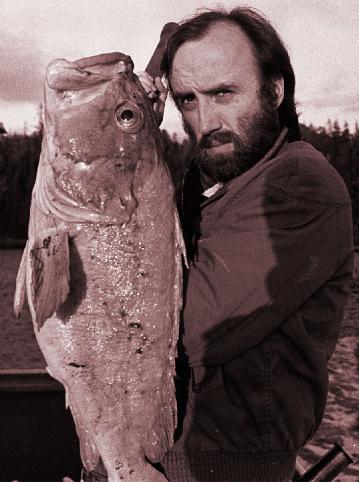 Thank-you speeches normally acknowledge people. But when Ray Troll accepted the Governor’s Award for Individual Artist, he said, “Thanks to the fish for all the inspiration.”

Along with the fish, he said, the artist’s inspiration comes from his family, of course, and the people of Ketchikan. “I had two minutes to thank everybody. That’s almost impossible to do.”

Gov. Murkowski and the First Lady presented the award to Troll Oct. 27 in Anchorage. The award included “a beautiful piece of artwork by (Homer artist) Ron Senungetuk. It’s a carved image of a caribou,” Troll said. The awards ceremony was “jovial” and a very nice evening, he said. He found out he was receiving the award about a month ago when the Alaska State Council on the Arts called him. “It kind of floored me, I didn’t really see it coming. But it was a real delight.
“It’s a real honor in a state like this, with so many talented artists. It’s a really cool thing to be recognized,” Troll said.
Charlotte Fox, executive director of the Alaska State Council on the Arts, said, “I think it’s wonderful because I knew a lot about Ray’s work.” She said that she had seen his Sharkabet exhibit in the Anchorage Museum and said it was her favorite. She had also seen his T-shirts and visited his Soho Coho gallery in Ketchikan.
But, she said, “I didn’t know about his community-based things. We kind of look at that, and the primary criteria (to receive the award) is impact on the state and major impact on the community in which they live. Ray has had a statewide impact and it seems he’s really done a lot for the arts in Ketchikan.”
Fox said the arts council blankets the state for nominations in late spring and creates a panel to review them all. The council then sends the nomination to the governor who usually accepts the recommendations.

Troll said he moved to Alaska in 1981 to teach college in Port Clarence. “On a clear day you could see Russia, that was my first experience of Alaska.” After that experience, he moved to Ketchikan in 1983 to be a fish monger for his sister, Kate Troll. “I had a master’s degree in my back pocket and I was looking for something to do,” he said.
Troll said he had a one-track career in art. “I started at the age of four when I picked up a crayon. At age 52 I’m still drawing dinosaurs — I’ve just added fish.”
Locally Troll is known for the Soho Coho Art Gallery, Raven’s Brew Coffee logos, the Kayhi Kings Mural at Ketchikan High School, the Midnight Run Painting at Point Higgins Elementary School and his T-shirts.
Troll is known statewide for his murals, books, exhibits and guest art classes at schools in Sitka, Juneau, Cordova, Homer, Seward and other cities. Troll also had a species of ratfish named in his honor in November 2002. The Hydrolagus trolli was named by ratfish researcher Dominique Didier because they shared a love of fish in general and ratfish specifically.
Victoria Lord, now program associate with the Rasmuson Foundation in Anchorage, nominated Troll for the award. “I’ve probably been nominating him off and on for several years. I recognize that he is a person that is very generous with his time. He promotes not only himself, but other artists as well,” she said.
Lord was director of the Ketchikan Area Arts and Humanities Council from 1986 to 1997 and said she saw how much Troll put into the arts community. She said those years were formative for the arts council and Troll helped them open the Main Street Gallery (now the Mainstay Gallery) and begin the first Friday art openings. “He and his wife, Michelle, have been really supportive of other artists. He’s been very inclusive and has had an impact statewide.” She remembered when Troll exhibited Sharkabet in Ketchikan and said she heard children who knew the names of all the sharks from that show. She also said his involvement in Natural History Museums, she said, has helped introduce art into other contexts so people can relate art to other things.
Lord is not the only one who has recognized his work in this area, though. Troll said he will be receiving an award from the Academy of Natural Science in Philadelphia in June for achievement in the natural history arts. “I guess it’s a pretty cool honor and a real privilege to be part of that crowd,” he said. He’ll travel to Philadelphia for the award.
Lord said she nominated him mostly because, “he’s a community person, he’s connected to people and he’s connected people to the arts.”