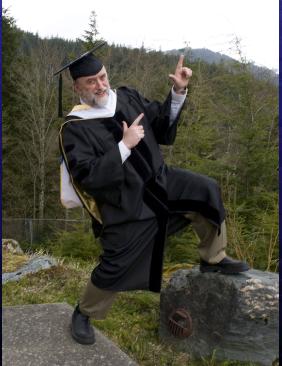 Over the past 25-years, Ketchikan artist, naturalist, author, and musician Ray Troll has merged art and science in a way that appeals to just about everyone.

Troll is at the drafting table on the ground floor of his studio overlooking the red roofs of downtown Ketchikan and the slate blue Tongass Narrows. The three story cedar structure is covered with corrugated steel to ward against the wet climate. “You just walked in as the crab was coming to life,” he says. It’s a Wednesday and Troll’s been steeped in an ink on paper work for the better part of the week. “I like to let the art take its time.”

Likely inspired by the recent Alaska Folk Festival appearance of his eclectic and multigenerational (son Patrick is the drummer) band, Ray Troll and the Ratfish Wranglers, the drawing is of a whimsical trio.

“There is a banjo playing mermaid, a rock fish playing bass guitar, I like to call it a bass guitar on the left and there is a humpy salmon, note the humped back there, (got to know your fish), playing an acoustic guitar there on the right,” he says. In the foreground is a Dungeness crab. “That’s not just a harmonica playing crab there. That’s a harmoni-crab.”

Troll’s pun-filled fish art has become Alaskan legend. “‘Spawn Till You Die,’ would probably make a nice epitaph for my tomb stone,” he notes. The well-known scull and cross sockeye salmon design is on t-shirts worn by rock musicians, movie stars and countless summer visitors.

Troll’s murals hang in public spaces and schools from Southeast Alaska to Washington D.C. He’s been commissioned to create a mural for the renovated Novatney building at the University of Alaska Southeast’s Juneau campus. He’ll craft it on the 20 foot tall back wall of his studio. A ladder leads to a second floor office. Crane your neck and look strait up to the ceiling, and there’s the underside of a bed frame suspended between wood beams. “That’s the spawning bed,” he quips.

Troll walks over to a bookcase and picks up a handful of personal journals. They hold sketches and writings documenting his creative process from the time he arrived in the salmon and rain capital with a Master in Fine Arts from the WashingtonSate University in 1981. Stints as a court room artist and on the slime line led to a position teaching art at the UAS Ketchikan campus.

By the late ’80’s his unique creations became a career that keeps evolving as his art becomes more intricate and vibrant. His t-shirts, hats, refrigerator magnets and prints are sold on-line and in K-town at the gallery-store owned by Ray and wife Michelle, Soho Coho.

In 2006, Troll received the Alaska Governor’s Award for Individual Artist. In 2007, he joined John McPhee and Ansel Adams in being a recipient of the Gold Medal for Distinction in Natural History Art from the Academy of Natural Sciences in Philadelphia. He even has a species of fish named after him (Hydrolagus trolli – a species of ratfish).

Troll’s fascination with the origin of life led to the dubious distinction and collaborative efforts with writers and scientists that have resulted in books and exhibits spanning the Amazon to San Francisco. Troll keeps rat fish close at hand in his studio (they are spotted and have rat-like tails), preserved in jars of alcohol.

In the introduction to a 2005 retrospective of Troll’s art, long time friend and collaborator Brad Matsen wrote that one day Troll “should get an honorary Ph.D. acknowledging his role as one of the great science teachers of all time.” At graduation ceremonies in Ketchikan and Juneau this weekend, that vision will be realized. Troll will accept an Honorary Doctorate in Fine Arts from the University of Alaska Southeast.