Something Fishy This Way Comes 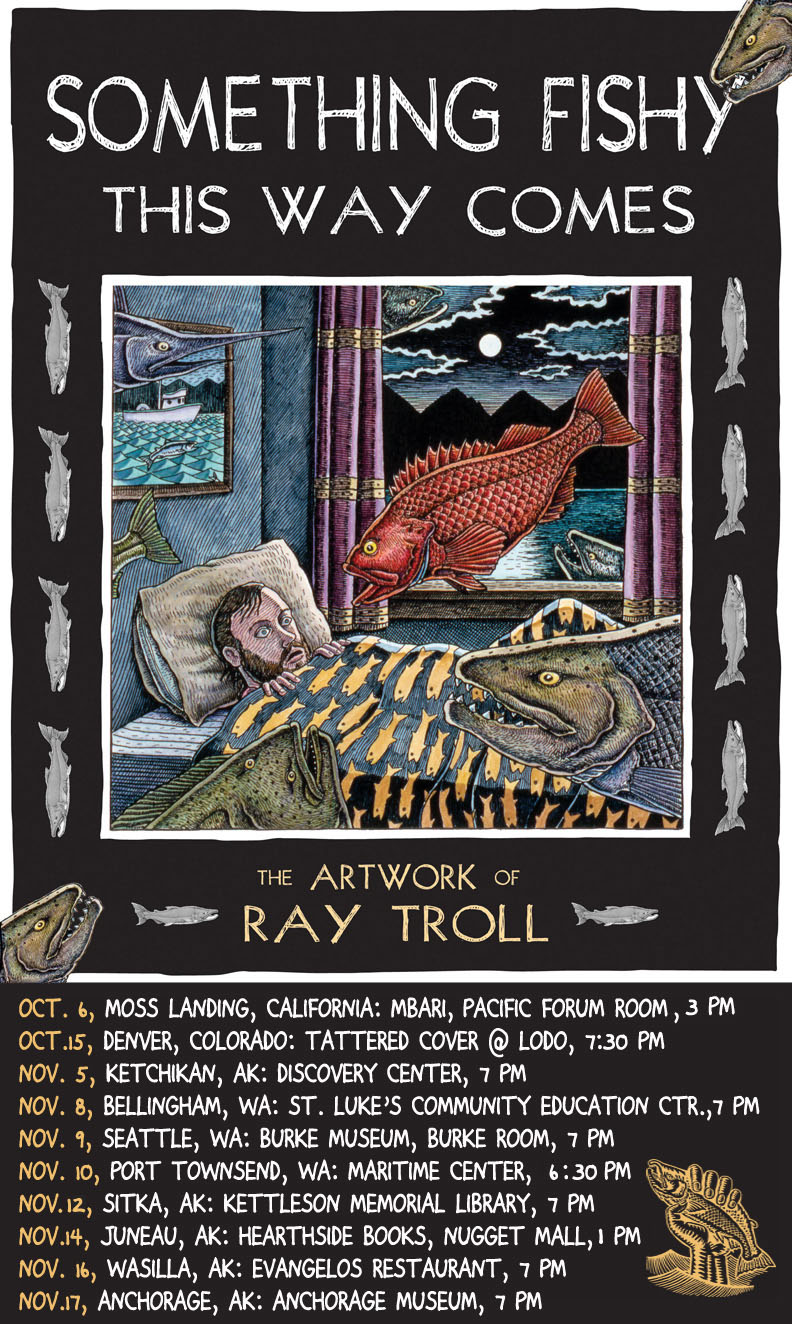 I’ve got a brand new book out this fall called “Something Fishy This Way Comes”, published by Sasquatch Books of Seattle. It’s a collection of my T-shirt art from the last 30 years featuring the cream of the crop, outtakes, rarities, hits and misses. There are bound to be images most folks have never seen. It’s got glorious fish-filled color throughout all 128 pages along with a witty intro by Sitka author John Straley.

We’ll have signed copies of the book in our web store November 1. Before that I’ll be heading out on a whirlwind mini-tour of the West promoting the book, doing slide shows and book signings in a town near you (hopefully!). Check out the schedule below. Hope to see you there!

The Amazon Voyage exhibit is now showing at the Denver Museum of Nature and Science! It’s chock full of my fishy art.
http://exhibitions.dmns.org/

And Cruisin’ the Fossil Freeway is at the Academy of Natural Sciences in Philadelphia, starting October 23.
http://www.ansp.org/museum/future.php 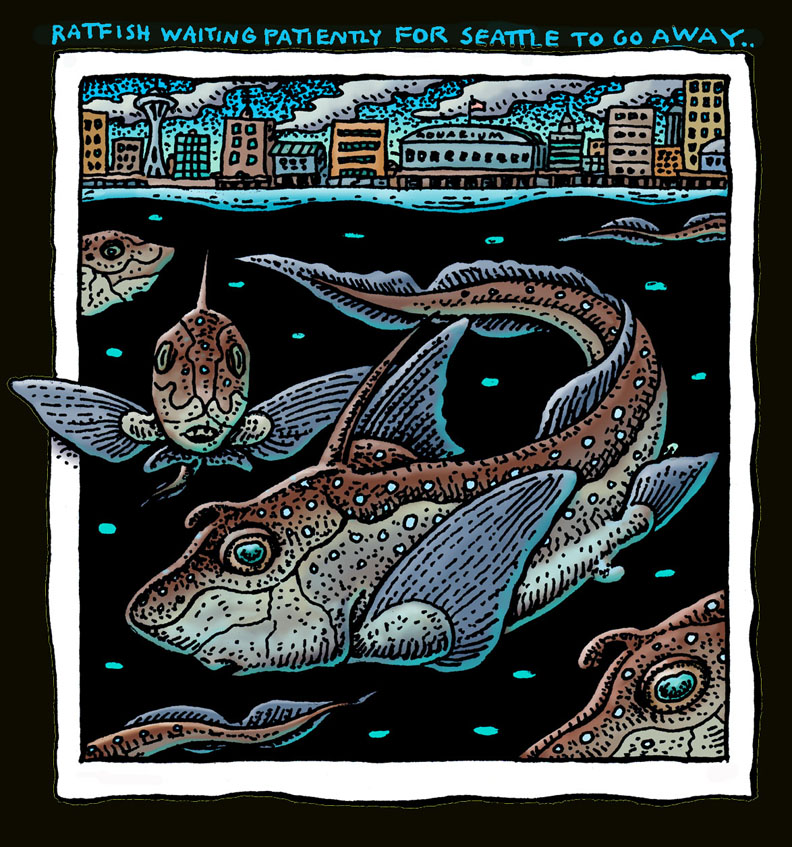 Well folks I’ve been saying it for decades now but here’s definitive proof that yes indeed the lowly ratfish do rule! Sandi Doughton of the Seattle Times recently did a great story all about how my favorite fish have completely taken over Puget Sound. They now make up 70 percent of the biomass found there! Not necessarily a good thing for the ecosystem. Read about the Rise of the Ratfish by clicking right here.

Something Fishy This Way Comes” seems to have been well received and continues to do well. Here are some of the reviews so far.

Alaska artist Ray Troll hit on a good idea in the ’80s, which was to mock our Northwest love for salmon, and from that he spawned—sorry!—a cottage industry of illustrations, coffee mugs, and T-shirts that are now familiar from Dutch Harbor to Portland. He’s both an ichthyologist and an inveterate punster; an illustration called Hook, Line and Thinker, for instance, takes the figure by Rodin and places a fly rod in his hand. Yet it’s not all fish and wordplay in his colorful collection Something Fishy This Way Comes(Sasquatch, $19.95). Like his fellow naturalist-cartoonist Gary Larson, Troll finds much to amuse at the intersection between man and beast (or between pan and feast, if you prefer): overcrowded fishing holes, fishermen weighed down by too much gear, overconsumption, and human vanity. And, like the short, cyclical lifespan of our precious salmon, death is a constant presence in Troll’s whimsical panels. In one poster image, people cavort in the sun with fish and other living creatures; yet beneath lie the fossils and bones of all those who came before—the fertilizer stack to which we’ll all be added. “Life is good,” reads the inscription, but “death is not bad.” BRIAN MILLER

Ray Troll is Alaska’s surrealist of the sea. His widely popular artwork presents a world where fish sit atop the evolutionary scale, humans are reduced to highly vulnerable observers, and the eeriness of ocean life becomes reality above the surface as well.

The typical Troll painting features a dreadfully bad pun as it’s title and contains a scene that illustrates the joke with psychedelic explosions of color and a cacophonous montage of lively imagery. Troll’s works reveal an entire universe operating right alongside ours, an aquatic wonderland where the ooziness of life is cause for celebration and the things we would ordinarily find repulsive suddenly become enchanting.

“Something Fishy This Way Comes” is a new collection featuring more than a hundred pages of Troll’s gems spanning his 30-year career. And while these days Troll’s works can be found in such high-end venues as the Smithsonian, this book reminds us that Troll remains a popular artist at heart. Despite all the intricacies and scientifically accurate details, the real reason we like Troll’s work is that it’s just doggone fun to look at.

Take, for instance, “Cutthroat Businessmen.” This painting features a trio of cutthroat salmon standing upright on their rear fins on a street corner, dressed in sports jackets and clutching briefcases. Or consider “Combat Fishing,” which takes the well-worn description of overcrowded stream fishing to its literal extreme. And then there’s “Salmon Wars,” which finds another group of fishermen engaged in hand-to-hand combat with their prey. These pictures are very funny, but the fish in them are drawn to anatomical perfection.

Troll first gained renown by trafficking in T-shirts and refrigerator magnets, and many of his most beloved works from these media are featured in this book. Troll classics like “Jammin’ Salmon” (featuring a group of salmon musicians), the popular feminist poster, “A Woman Needs a Man Like a Fish Needs a Bicycle” (wherein a fish sits awkwardly atop a bicycle), and the philosophical “Life’s a Fish and Then You Fry” are all found here, as is the irreverent “Fish Worship, is it Wrong?” And of course, there’s the perennial favorite “Spawn Till You Die,” still timeless after all these years.

Several themes run heavily through Troll’s work. As a popular artist, he’s naturally drawn to rock and roll, and the musical/artistic puns he pulls in this realm include the lighthearted “Don’t Worry, Be Humpy,” a rendition of a guitar-shredding king salmon titled “Wild King, You Make my Heart Sing,” twirling fish in “Twist and Trout,” and “The Baitful Dead,” which shows a bucket load of live bait emerging from the iconic Grateful Dead skull.

As should be expected from an artist obsessed with nature, political commentary of an environmental bent is also prevalent in his work. “Tanker from Hell” is clearly a response to the Exxon Valdez calamity, and is accompanied in the book by a smaller drawing showing the Chinese yin-yang symbol with a live fish swimming through the clear half, and a skeleton fish trapped in the oily dark side. On another page, “Fish are not for Farming” depicts a Midwestern field full of perfect rows of fish sprouting from the ground while another fish drives a tractor.

Biblical puns are another constant, and include “The Eyes of Cod are Upon You,” “Fish Discipline: Never Spare the Rod,” and — one of the best in the book — “Ichtheology: Thy Rod and Thy Reel Comfort Me.”

Troll delights in spoofing great works of art. “Salvador Dali Varden” places fish in the famed surrealist’s “The Persistence of Memory.” “The Stream” features a terrified fish in a replica of Edvard Munch’s “The Scream.” And “Hook, Line and Thinker” finds Auguste Rodin’s “The Thinker” alongside a stream with a fishing rod in his hand. At the other end of the art market, Troll offers twists on movie posters like “Pulp Fishin’” and “King Cod vs. Codzilla,” and a nod to velvet art with “Fish and Chips” which replaces dogs with fish in the famous poker scene.

Most of Troll’s work veers toward sea life, but when he turns his attention landward, he seems to have a fetish for placing humans in the paws of grizzly bears, playing on the fears that dwell just above the subconscious of all who live in bear country.

Evolution is another of Troll’s favorite topics, and this dovetails with a couple more of his recurrent themes, sex and death. Troll is deeply in touch with his inner fish, as he demonstrates in a series of nine facial renderings starting from a simple fish and working its way up through lizards, simians, and on to Troll himself. The sexually provocative “Waiting With Baited Breasts” lives up to its title, while “Life is Good, Death is Not Bad” shows life above ground with the detritus of what once lived supporting it from below.

And then there’s Troll’s advice about life. “The Perils of Nude Flyfishing” depicts a potential scenario that will convince men to keep their drawers on when they enter the stream. “Decaffeinated, Decapitated; Know the Difference” illustrates this important bit of knowledge quite graphically. “It’s Never too Late to Mutate” reminds us that we are all part of the ongoing evolution of life. And several pieces document the hazards of swimming with the dreaded Amazonian candiru (and if you don’t know what those fish are famous for, I’ll just let you Google it).

Troll presents all this with relentless humor and nonstop absurdity. It’s surrealism for the masses. Flipping through this book, one feels like the humans found in an average Troll painting: astonished, amused and slightly frightened. A parallel universe gushes out of Troll’s imagination.

Even if WC weren’t a serious fly fisherman, he’d still be a fan of Ray Troll. It’s not just the horrible puns (“The Fin Art of Ray Troll,” “Kvetch and Release”) or his ability to turn a platitude on its head (“If you must smoke, smoke salmon”). The man is also a fine artist, with a distinct style that manages to accurately illustrate a Ling Cod wearing over-the-top jewelry (“Bling Cod”).

Not only are the sharks accurately drawn, anatomically correct, with several species shown; he’s managed to draw a pretty decent card game, too. And make one of his lamentable puns.

WC isn’t the only one who thinks Troll’s illustrations are excellent. His work hangs in an amazing number of scientific institutions, and he has had art shows in most of the national venues.

Troll has a new book out, Something Fishy This Way Comes, the Artwork of Ray Troll. It’s mostly the fish-focused drawings, but it is excellent, and kudos to Sasquatch Books for a high-quality job.

Work like Troll’s needs to be rewarded. Visit his terrific website and groan over his terrible word play. Buy one of his terrific t-shirts. Purchase one of his books. And if you are ever in Ketchikan, stop by the Soho Coho Gallery and see the Man himself. To quote a better reviewer, “Ray brings a street-smart sensibility to the worlds of ichthyology & paleontology.” And a lot of fun.

Ray Troll is on the short list of Alaska’s State Treasures. If you haven’t sampled his work, start the New Year right with a visit.