The Whorl Tooth Sharks of Idaho 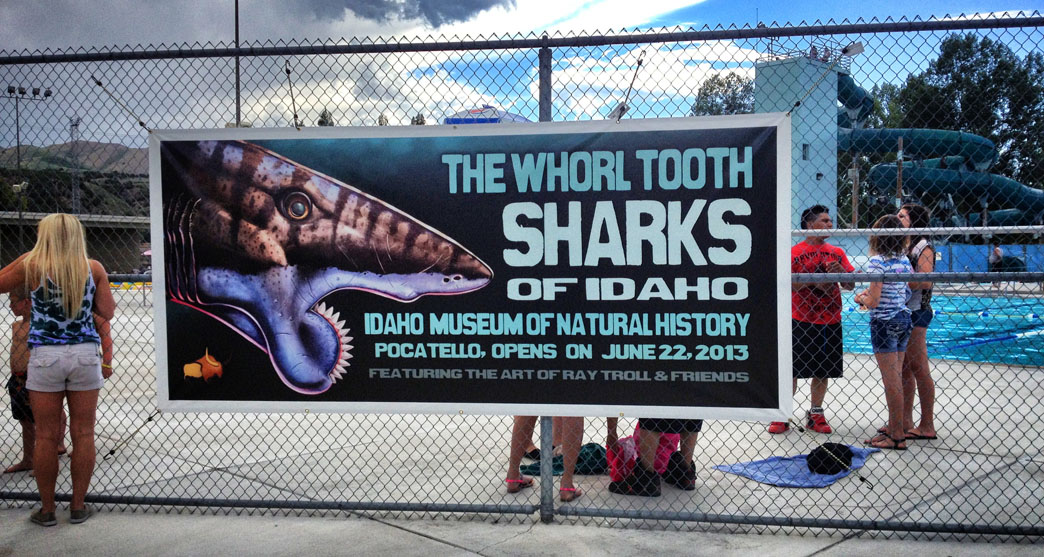 Shark week is every week in Idaho this year!

The Idaho Museum of Natural History on the ISU campus in Pocatello opened a major new exhibit based on a giant prehistoric shark found in the phosphate mines of Idaho. “The Whorl Tooth Sharks of Idaho” opened on June 22 2013, and runs through the end of the year.

The exhibit features a wide array of fossils of the 270-million-year-old shark called Helicoprion, along with original artworks by Alaskan artist Ray Troll, life-sized sculptures of the shark bursting through the museum walls by sculptor Gary Staab, original music, a short documentary and much more. There are children’s activities too, so it promises to be fun for the whole family.

The exhibit is a unique combination of science, art, music and humor. “The fossils are spiraling coils of razor-sharp shark teeth and are beautiful things just to look at,” said Leif Tapanila, ISU associate professor of geosciences and IMNH earth sciences curator. Opening day activities on June 22 include a slideshow by Troll and Tapanila at 2 p.m., guided tours of the exhibit from 3 to 4 p.m., and a book and T-shirt signing by Troll.

Tapanila was the lead scientist on recently published research on Helicoprion that unlocked many of the mysteries surrounding the shark. “For the last 100 years scientists really had no idea where the coil of teeth went on the shark’s body and it’s been open to some very wild speculation,” Tapanila said. “We CT scanned our best fossil of the shark and we now know exactly where the coil of teeth was positioned. We nailed it!”

The shark has intrigued many people over the last few decades and Ray Troll is probably the ancient shark’s biggest fan, according to Tapanila. “I started working with the ISU crew a few years ago when an undergraduate student named Jesse Pruitt contacted me wanting to know more about the shark,” said Troll.Pruitt’s query reignited Troll’s passion for the shark. As the new research progressed Troll was an active participant in the work revising versions of the shark’s appearance as the work progressed.

“Scientists need artists to bring fossils alive,” Tapanila said. “Working together we can dial-in the most realistic versions of the past.”

Illustrations featured in the new exhibit show the progression of art and science, and many of the fossils are being displayed for the first time.

This exhibit is made possible by the Anne Staton Voilleque Charitable Foundation, The William J & Shirley A Maeck Family Foundation, the Hitz Foundation, and The Monsanto Fund.

The Idaho Museum of Natural History is open Tuesday through Saturday, 11 a.m.-5 p.m. Entry is $5 adults and $1 children pre-K to grade 12.