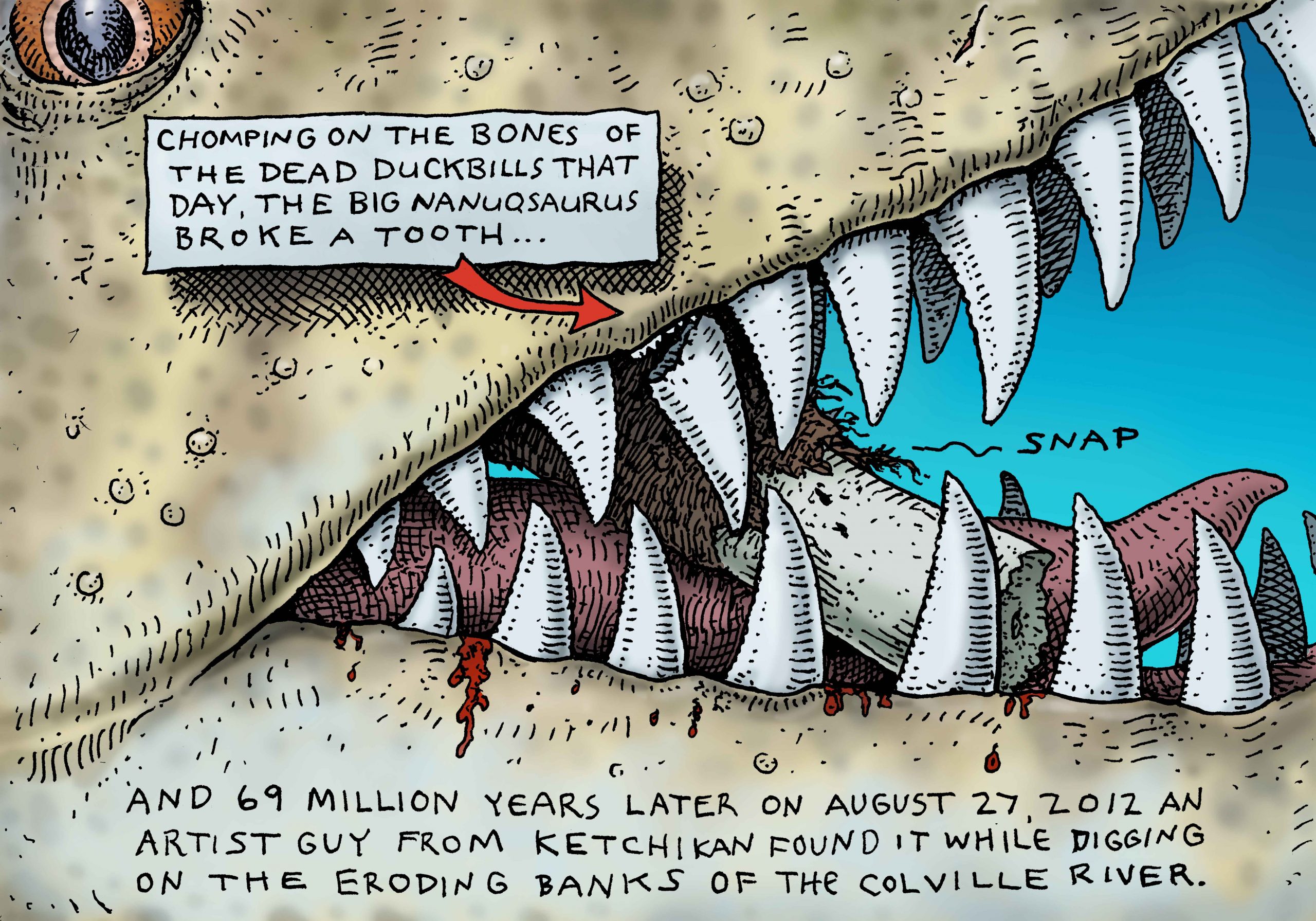 It was cold for an August afternoon, but then again this was Alaska, and we were in the far north, above the Arctic Circle, high on the banks of the Colville River. A foggy drizzle spattered off our heavy raingear as we carved our way with shovels and pocketknives through mudstone hiding dinosaur bones by the hundreds.

This 2012 expedition was part of the Cruisin’ the Fossil Coastline book project that I had embarked on with my paleontologist pal Kirk Johnson, director of the Smithsonian National Museum of Natural History, who I’ve known for more than two decades. I call him “Doctor J” for short. The ambitious undertaking, resulting in our 2018 book, had us looking at the fossil record of the West Coast of North America from Baja, Mexico, all the way up to Prudhoe Bay, Alaska.

Next to me, Kirk dug an amazingly precise hole, with exact edges and a clearly defined square shape to it—he is a scientist after all, and that’s just the way they do things. My hole was far less organized. But I’m an artist, so I’m easily distracted by things such as screeching peregrine falcons circling overhead or my own imagination which runs wild with dreams of finding a tyrannosaur fossil. I’ve had this crazy hope my entire life, ever since scrawling my first crayon drawings as a little kid. In the great hierarchy of dinosaurs, there is nothing bigger or nastier than a T. rex, and I’ve always craved the personal thrill that would come from  discovering one of my very own. 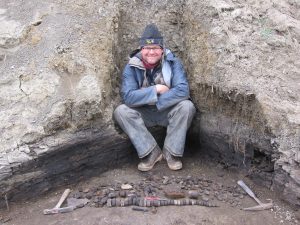 Any paleo-nerd can tell you that T. rex lived 66 million years ago in the late Cretaceous period. We were digging in rocks that were thought be 69 million years old, so there was little chance of finding an actual Tyrannosaurus rex. But there was the possibility that we could find its Alaskan relative, Nanuqsaurus hoglundi, a member of the tyrannosaur family that was just as terrifying as its cousin.

The problem was that we’d been on the Colville for a week, our adventure nearing its end, and none of the five members of our expedition had found a single bit of a meat-eating dinosaur fossil. All we had discovered were hundreds of pieces of juvenile duckbilled dinosaurs, Ugrunaaluk kuukpikensis, an Inupiat name meaning “Ancient Grazer.”

Then Kirk yelped, “Check this out!” He held up the tooth of a raptor called Troodon. The tooth was beautifully serrated, like the finest of steak knives. I was thrilled for Kirk. Really I was.

Fossil envy can be a powerfully motivating force, so after celebrating Kirk’s find, I looked over at his tidy mini-quarry and thought that if I dug along the same level, maybe I could make my own discovery. A few minutes later, I flicked open a dark clod of dirt with my knife, and there it was: a large tyrannosaur tooth, broken at the base, as if, perhaps, it had just snapped off while chewing on the bones of an unlucky baby Ugrunaaluk.

Tears welled up in my eyes in a weird mixture of joy, exhaustion and relief. I was 58 years old at the time but I felt like I was five again, touching my beloved monster for the first time in the real world. 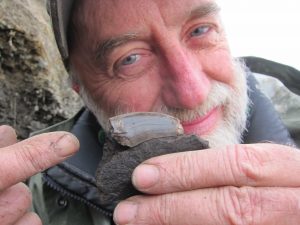 The next day, I stayed back at camp to draw in my sketchbook. The act of drawing helps me solidify the images playing through my mind’s eye. Ever since moving to Ketchikan in 1983, Alaska and its vast wonders have been an endless source of inspiration for my “scientifically surreal” art. At first it was fish and the state’s vast fishing culture that fired my creative energies, but as I spent more time with people like Kirk, I rekindled my lifelong love of all things prehistoric. Working on our book opened my eyes to the astounding fossil riches of my home state. I had learned about mammoths in Fairbanks, ammonites in the Matanuska valley, palm fronds near Sitka, extinct marine mammals from Unalaska, and even a 15-million-year-old tapir from Homer. Along with all of those wonderful finds, I had developed a true appreciation for deep geologic time and our precarious place here on the planet.

At camp I thought about my tyrannosaur tooth, which I had found amid a jumbled field of baby duckbills. What act had played out on this spot so long ago? Perhaps a flood or tsunami wiped out an entire flock of the young herbivores, and then the scavengers had arrived to clean up the carcasses. Or maybe a pack of raptors did the dirty work and the tyrannosaur merely came along later and picked at the scraps? Pencil and tooth in hand, I got to work.

From Ketchikan, Ray Troll creates fishy images that swim into museums, books and magazines, and onto t-shirts worn around the world. Troll’s drawings from the Colville River expedition and the tyrannosaur tooth are displayed as part of the “Cruisin’ the Fossil Coastline” exhibit at the Alaska State Museum in Juneau showing now through October of 2019.

One thought on “Alaska Airlines Magazine article, May issue 2019”