A fun article about Ray’s work on “Artistic Fuel” 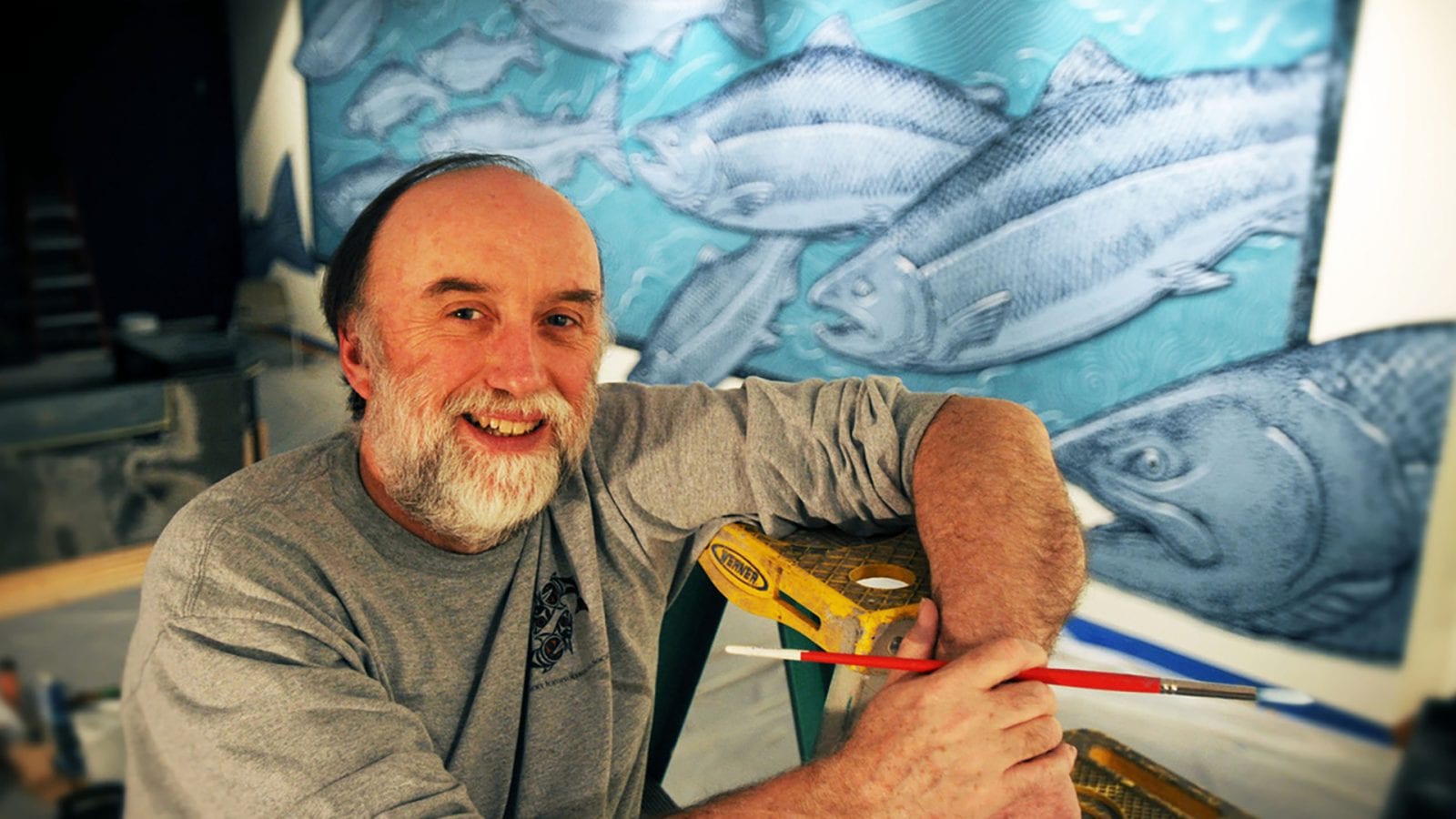 . For four decades, Troll has honed in on the magic and the weirdness of the natural world, inspired by the Alaskan landscape that surrounds him.

“It’s really just fascination with the planet,” Troll said. “If you open your eyes and soak it in, it’s endlessly fascinating.”

Troll is based in Ketchikan, Alaska, on the state’s southern panhandle that runs along the border with British Columbia. It’s a charming coastal town that depends on the c

ruise ship industry with around a million tourists each summer in a normal year. Troll’s studio is also on the edge of the pristine Tongass National Forest, the nation’s largest national forest.

Ketchikan is the perfect place for an artist with a lifelong passion for science to capture the strange wonder of the natural world. Troll’s work has been described as “scientific surrealism,” a label he fully embraces. And he’s in his

element in southern Alaska, with its fossil-rich coast, hundreds of species of fish, an abundance of plants and other wildlife and a thriving native culture. The southern panhandle is home to the Tlingit, Haida and Tsimshian communities with their own rich artistic histories.

Ray Troll has been drawing dinosaurs since kindergarten. Growing up as an Air Force brat, he learned that his artistic skill was a way to make connections as the perpetual new kid.

“Art has always been what I’m good at. It was my childhood superpower,” he said. “I’m lucky enough that my curiosity and my drive and inspiration are still basically the same stuff as when I was a kid. I think Picasso said something along the lines of, ‘Every child is born an artist. The trouble is keeping that artist alive in you as you get older.’”

Troll was born in Western New York. He moved 11 times with his fami

ly due to his father’s military career. Troll has a BA from Bethany College, a fine arts-focused liberal arts school in central Kansas. He earned an MFA in studio arts from Washington State University in Pullman. In 1983, Troll was just out of grad school and looking for teaching jobs. His sister, the writer and environmental activist Kate Troll, was managing a seafood shop in Ketchikan. So he joined her to work for the summer. That summer job turned into a lifelong home and a source of endless inspiration for his work.

“It’s tremendously inspiring…Alaska’s the biggest influence on my work,” Troll said. “I can walk three blocks up the hill and be in wilderness. I can walk two blocks downhill and be by the ocean.”

“Spawn Till You Die”

For an artist with a passion for biology, paleontology and the natural world, Ketchikan is an artistic paradise. Nicknamed the “Salmon Capital of the World,” it’s also a hotspot for prehistoric ammonites. They are iconic spiraled mollusks that may be the world’s most recognized fossils. Fish and fossils are Troll’s artistic claims to fame.

“Fishes of the Salish Sea.” It details the aquatic inhabitants of the network of waterways in Northwest Washington and British Columbia that include the Puget Sound. But his work is also populated with clever puns and more than a little nerdy humor. Troll’s classic “Spawn Till You Die,” T-shirt was made famous in the 2007 comedy “Superbad,” and his merch has a cult following up and down the West Coast.

Troll frequently collaborates with well-known scientists on books. His work is the subject of traveling exhibitions at natural history museums around the country. Science and natural history are passions for the 66-year-old creator. However, art has always been his way of accessing the natural world.

“I strive to make compelling images that draw you in, that are pleasing to the eye. I strive to make them dynamic and eye-catching,” he said. “Art has always been first for me…There’s a lot of science that informs what I do…I think everyone should be multidisciplinary in their lives and everyone is really.”

Troll’s book “Cruisin’ the Fossil Coastline” created with his longtime friend Kirk Johnson, the director of Smithsonian‘s National Museum of Natural History in Washington DC, explores the fossil history of North America’s West Coast. An exhibition associated with the book is currently in Fairbanks and scheduled to move to Seattle this winter. Troll’s exhibit “Prairie Ocean: Long Time No Sea,” a collaboration with Kansas-based artist and fossil hunter Chuck Bonner. It is on display at the Sternberg Museum of Natural History in Hays, Kansas. It explores the natural history of Kansas via fossils from the period when the midwest was covered by an inland sea 85 million years ago.

With COVID crushing the cruise ship industry, 2020 has meant a summer like no other in Ketchikan.

For Ray Troll, this has meant more time exploration in Tongass and fishing from a deser

ted cruise ship dock. But it has also taken a toll on the artist’s bottom line. Troll and his wife Michelle run the Soho Coho Gallery in Ketchikan. The sales of Ray Troll T-shirts are their bread and butter. He’s seen a big bump in online sales in the last few months. It can’t compare with hundreds of thousands of tourists streaming through the town of 13,000 during a normal summer.

On the upside, the COVID shutdown has spawned a cool collaborative project for Troll. Earlier this month, he launched the new “Paleo Nerds” podcast with the California-based ventriloquist David Strassman. The two fossil lovers clicked 20 years ago when Strassman walked into Troll’s gallery in Ketchikan and have been friends and collaborators ever since. When COVID canceled a planned tour for Strassman, the longtime friends decided to a jump into a virtual

Funny back-and-forth (what’s the correct pronunciation of “epoch”) to thoughtful conversations on the wonders of paleontology and the profound meaningfulness of evolution.

“I think most people don’t know what we are, who we are, where we came from, how we came to be,” Troll said. “It’s a mission to me, in a way, to open eyes up to these relationships.”

The Smithsonian’s Johnson has described Troll as a “scientific surrealist,” and for Troll, it applies 100 percent. Nature itself can be pretty surreal, from evolution to the wild adaptations of prehistoric life to the insanely cool features of contemporary deep-sea anglerfishes, with their sci-fi jaws and luminescent lures. And Ray Troll will keep tapping into the beautifully surreal right in his backyard.

“I once came up with the phrase ‘verisimilitude like you wouldn’t believe.’ It’s so astoundingly weird that it’s unbelievable– but it’s real,” he said. “I’ve specialized in a lot of those kinds of things.”