Halcyon Daze of the ‘Borg: the Photos 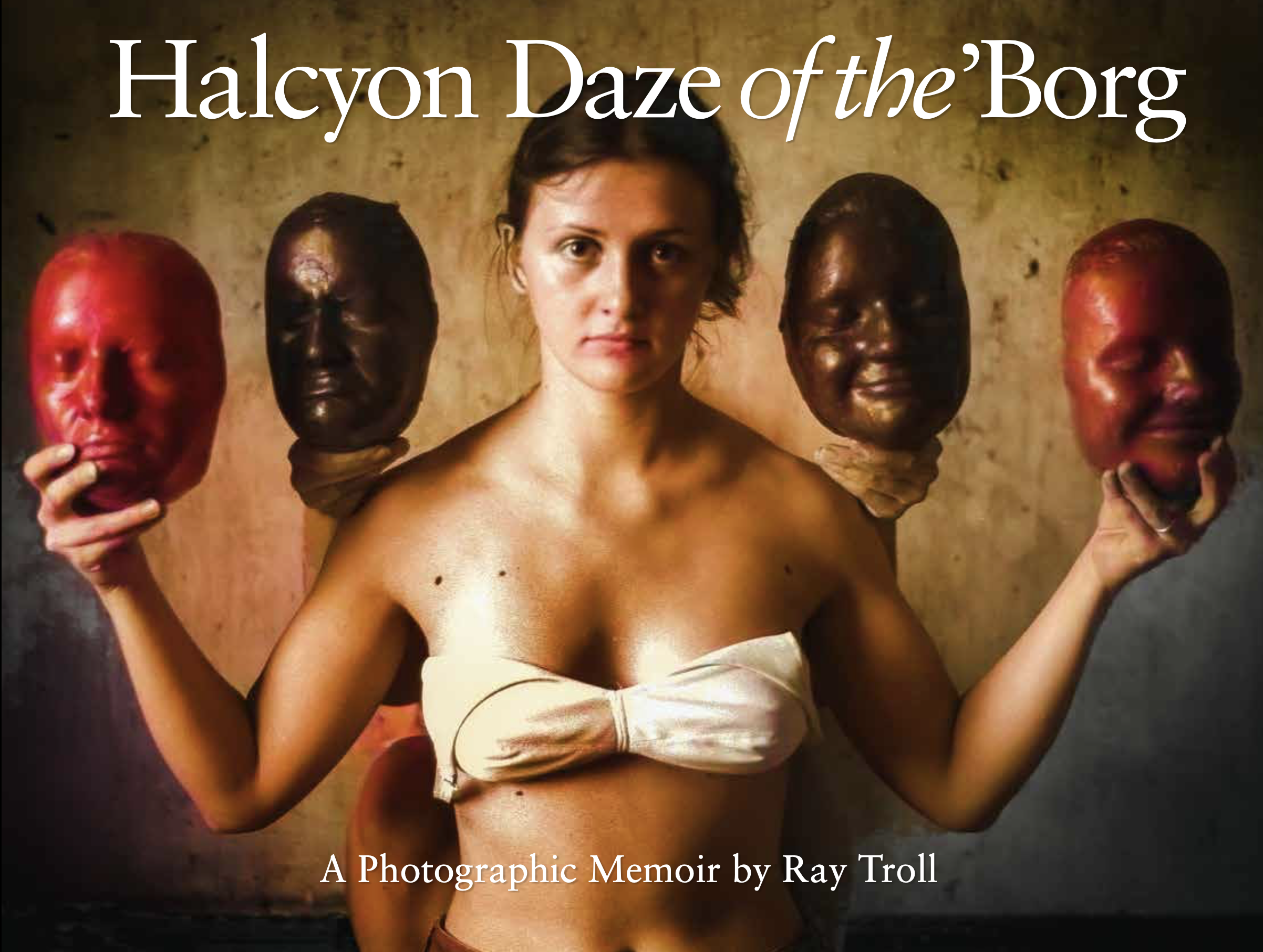 Halcyon Daze of the ‘Borg: A Photographic Memoir by Ray Troll
The small town of Lindsborg, Kansas is known as ‘Little Sweden USA’. It’s also the home of Bethany College where I went to art school and earned a Bachelor’s degree in 1977. After earning my MFA at Washington State University I returned there to teach from 1982 to 83.While living there I took many a ‘formal’ portrait of my fellow students, professors, working artists and town characters. In 2021 I exhibited this collection of photos at Lester Raymer’s Red Barn Studio and Museum and the Sandzen Memorial Gallery. It’s a truly unique glimpse into the art revolution that took place in this prairie college town.
https://www.trollart.com/product/halcyon-daze-of-the-borg/

Lindsborg’s Seventies art scene left an indelible mark on my life. These images, hopefully, convey the spirit and flavor of that unique time in a very small town in Kansas.

I moved to Lindsborg in January of 1974, to study art at Bethany College, a small Lutheran liberal arts school nestled between the expansive wheat fields of eastern Kansas and the winding banks of the Smoky Hill River. I had heard good things about the town, the college, and the art department. I was nineteen at the time, cocky, a bit arrogant and naively self-assured in my artistic abilities. I’d been raised in a family of six and was desperate to get out on my own and to make some sort of mark in the world.

I was eager to leave the big city of Wichita behind me, too, having spent a frustrating, unfulfilling semester at Wichita State University, unnoticed and lost in the crowd. I wanted to explore the creative life at a smaller school where I could make genuine connections with my professors and fellow students.

I bought a 35 mm camera and immersed myself in the world of photography, a form of artistic interpretation and creativity that resonated deeply with me at the time. There was a small darkroom in the art department that soon became my second home. I loved capturing moments from the world around me and seeing them magically reappear in the Dektol developer under the red light of the darkroom, thick with the acrid smell of the stop-bath and fixative. I was awestruck seeing images appear in the plastic trays as I rocked the chemicals back and forth.

I liked the idea of taking formal portraits, of trying to capture the essence of a person in my lens, sometimes with a touch of theatricality. I’d direct my subjects with minimal instructions, most often with a request to simply “go blank” and not to smile at the camera, to simply look at me. Smiles were too easy, too posed. I wanted something deeper, a connection of some sort. Maximize the mystery.

Was there something there in their expressions that revealed their inner thoughts, a flicker of emotion or bemusement? Were they tense, at ease, smirking just a bit, happy in the moment, or trying to figure out who I was and why I was pointing a camera at them?

Taking a breath, I pointed the camera.

It’s a vulnerable moment, preparing oneself to be studied, looked at closely. Our gazes met, the subjects judging me as well, assessing me and the awkward situation.

The visual conversation between the model and the artist is captured as the shutter snaps. We’ve been taught that to stare is rude and intrusive. A photograph though, allows you to linger and study the lines of a face, to stare into a stranger’s eyes, observe the curve of a nose, the slouching posture, the open shirt, the unkempt hair, all there in that one frozen moment of openness.

My subjects were all friends to some degree or other. Some were merely acquaintances, or people I admired or wanted to know better, a couple were much, much closer than that. Some were role models for me, artists making their way and I wanted to glean the secrets of their survival in the creative world. All of them affected my life, in the sense that we are all “who we meet.” Some became lifelong friends.

I don’t pretend to think I captured all the important artistic figures in town, far from it. These photos represent my small corner of that bygone scene. I regret that I never “formally” photographed Steve Scott, Bob Bosco, John Murphy, Lee Becker, Rip Carlson, Randy Just, Richard Klocke, Kim McLelland, Cindy Schott and so many more that were also important people to me.

My recollection of that era and my attraction to photography took on even more import when I realized that many of the people in this series of images are dead. As we age and lose people around us, facing our own mortality, I think of the adage that the closer you are to becoming history yourself, the more you appreciate history. I felt the urgency to share this body of work to commemorate their memories. I also want to acknowledge how much my time in Kansas transformed my own artistic DNA and the roots of my artistic style.

Something special happened in little Lindsborg back in the Seventies and early Eighties. Then, there were over a hundred studio art majors at Bethany College and four to five full time faculty. Now there are only a handful of studio art majors and two full time faculty. The diminishing numbers say one thing, about the world getting to be a tougher place and turning more toward “practical things” but there’s more to it than that. Maybe it was the cultural residue of the Sixties lingering in the air, but the excitement of creativity was palpable in that town, in the streets, in the bars, in the raucous parties in the “slums” above Main Street, the “keggers” down by the river and “re-has” out in the country.

The artistic tension was there for sure, inspiration drawn from one another, feeding off each other like artistic cannibals. Subtle rivalries played out over the years with attempts to outdo one’s peers, just enough to inspire them to fire right back with something bigger and bolder and maybe just a bit more outrageous.

I feel lucky that I knew this rich cast of characters who swam through my life like some half-forgotten dream now. Townies and gownies, all making beautiful things, lost in the countless paint strokes, cranking out prints, throwing pots, making jewelry, the young and the old alike, making music, partying, skinny dipping, making love in dark rooms, smoking pot in the back alleys and drinking Coors nonstop, like it was the water of life. Goddamn it was fun.

It’s easy to sound like a generational narcissist, extolling the vaulted and overly inflated reputation of the Sixties and Seventies crowd. I think the artistic fires that sometimes ignite in small towns are bound to burn out… for a time. They come and go, subsiding and coming back in waves.

The Swedish landscape painter Birger Sandzen lit a creative fuse in Lindsborg in the early 1900’s. Lester Raymer fed off that heat in the Fifties and Sixties and left his legacy to the town. Mike Hartung’s powerful body of work has only recently exploded into sight and I trust that its impact will be felt for decades to come. All of that artwork can still be found in Lindsborg, in public and private collections, and out on the streets.